Dear comrades,
DOPT issued new guide lines in view of the Supreme Court judgement on 8.7.2010 in civil appeal No.596 of 2007 (appeal of Khazia Mohameed Muzammil v/s State of Karnataka & Anr.) examined the contention of automatic/deemed confirmation after the expiry of the probation period. After examining the various judgements, the Apex Court were of the considered opinion as to what view has to be taken would depend upon the facts of a given case and the relevant ruler in force.

In Para No.22 of the Judgement the Apex court obseved as follows

"Before we part with this file, it is required of this Court to notice and declare that the concerned authorities have failed to act expeditiously and in accordance with the spirit of the relevant rules. Rule 5(2)of 1977 Rules has used the expression 'as soon as possible' which clearly shows the intent of the rule framers explicitly implying urgency and in any case applicability of the concept of reasonable time which would help in minimizing the litigation arising from such similar cases. May be, strictly speaking, this may not be true in the case of the appellant but generally every step should be taken which would avoid bias or arbitrariness in administrative matters. no matter, which is the authority concerned including the High Court itself. Long back in the case of Shiv Kumar Sharma v/s Haryana State Electricity Board(1988) Supp. SCC 669] this Court had the occasion to notice that due to delay in recording satisfactory completion of probation period where juniors were promoted, the action of the authority was arbitrary and it resulted in infliction of even double punishment. The Court held as under:
'While there is some necessity for appointing a person in government service on probation for a particular period, there may not be any need for confirmation of that officer after the completion of the probation period. If during the period a government servant is found to be unsuitable, his services may be terminated. On the other hand. if he is found to be suitable, he would be allowed to continue in service. The archaic rule of confirmation, still in force, gives a scope to the executive authorities to act arbitrarily or malafide giving rise to unnecessary litigations. It is high time that the Government and other authorities should think over the matter and relieve the government servants of becoming victims of arbitrary actions.'
For further details and order copy please click the below link and down load

Extension of the period of adhoc promotion ordered in HSG-I

Postal Directorate vide letter No.4-16/2002 SPB-II dated 29/10/2010 has intimated to all the Circle Heads that the matter for extending the Adhoc arrangements for a further period of six months has already been taken up with the Department of Personnel&Training and further orders in this regard may be awaited.
In view of the above all the circle heads are ordering further extension of adhoc arrangements in HSG-I untill further orders subjected to the conditions prescribed in the earlier memos.This is for the information of the members.
Posted by aipeup3ap.blogspot.in at 6:55 PM No comments:

Grant of DR (from 01/07/2010)to C.G.Pensioners who are in receipt of Provisional pension in the pre revised scale of 5th CPC

Dear Comrades,
Department of Pensions and Pensioners Welfare has been issued orders to increase DR to Central Govt. Pensioners who are in receipt of provisional pension or pension in the pre revised scale of 5th CPC @ 103% w.e.f 01/07/2010 vide memo No.42/18/2010-P&PW(G) dated 27/10/2010. Please click the below link to getthe order copy.

Dept. of Pensions and Pensioners Welfare issued orders for Payment of commutation value of additional amount of pension in respect of employees who retired on or after 01/01/2006 but before 02/09/2008 and expired before excercising option for commutation of additional amount of pension vide memo No.38/79/08-P&PW(G) dated 27/10/2010. The issue has been exmined in consultation with Ministry of Finance,Department of expenditure who has observed that the pay commission's intention was that the pensioner should excercise a conscious choice in view of the fact that the commutation table has changed w.e.f.01/01/2006 as such, in these cases, the Rule 10 of CCS (Commutation of Pension) Rules,1981 may be followed and difference in commuted value be paid without fresh application. The intention was not to deny the higher capitalized value on account of revision of pension. For order copy please click the belowlink and down load.

All India Conference of the AIPEU Group-C has been notified by the General Secretary. The AIC is going to be held from 9 to 11 January 2011 at Dhyansagar Mangal KAryalaya, Alandi, Vadgaon Road, Tal-Khed, Dist.Pune. Agenda items along with Notice is placed here for the information of the members. 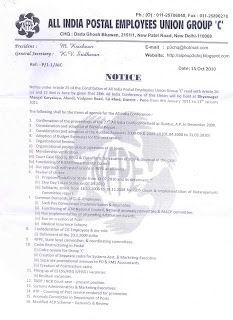 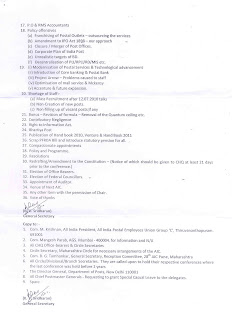 Posted by aipeup3ap.blogspot.in at 5:49 PM No comments:

The Reserve Bank of India has given permission to the Department of Posts (DoP) to launch its prepaid debit card, in partnership with Master Card

The Reserve Bank of India has given permission to the Department of Posts (DoP) to launch its prepaid debit card, in partnership with Master Card, which will allow customers to purchase products from all major retail outlets across the country.

The prepaid debit card by India Post would have a minimum value of Rs 1,000 and a maximum of Rs 50,000, a senior official from the department told Business Standard. Subsequently, the cards will be topped up with the required value.
The customers would also be able to withdraw money from ATMs using the new card from DoP. It could also be used for making online transactions, for mobile commerce and to facilitate electronic money transfer.

"The department has already received all the requisite approvals from RBI for the launch of the card and we expect to commercially announce it within a few months," the official said. DoP might also rope in a bank as partner in the venture, the official added, refusing to divulge further details.
The nature of the card would be in line with debit card offered by different banks. The software for the solution would be offered by one or more banks, while the required infrastructure and staff would be provided by the postal department.
According to the request for proposal issued by the department earlier this year, "the card (magnetic stripe-based) could be operated at merchant establishments or ATMs, where Master Card is acceptable, and in various post offices. Up to four add-on cards are proposed to be issued to one customer, along with the primary card."
The debit card would be issued to customers by major post offices, after a payment of activation fees and the amount to be loaded on to the card.
The official said such cards could also be used by organisations for giving allowances and other benefits to their employees.

Federation has decided and ordered to hold federal executive and holding of All India SBCO Association and All India Civil wing employees associations firtall india conferences at Hyderabad City in the month of December 2010. In this connection NFPE unions Circle Co-ordination committee meeting was held on 18/10/2010 to discuss the matter and conducting the above said programmes succesfully. My self and Com.K.Ramachandram, C/S Admin Union,Com.K.Satyanarayana, C//S DAP union,Com.S.A.Rahim from civil wing,Com.Kishan Singh,C/S SBCO association,Com.R.J.Madhusudan rao,C/S,R-III, Com.Y.Bhoomeshwar, C/S R-IV,Com.K.N.Chary Treasurer,AIPEDEU met and decided to Appeal all the members to donate Rs.50/-each to conduct the above said programmes succesfully. It is once again requested to all the Divisional/Branch Secretaries and Circle Office Bearers of the NFPE Unions to collect the above said amount and send to Respective Circle Unions.
For getting the NFPE Circular please click the below link and down load.
click here to get the circular
Posted by aipeup3ap.blogspot.in at 1:48 PM No comments: 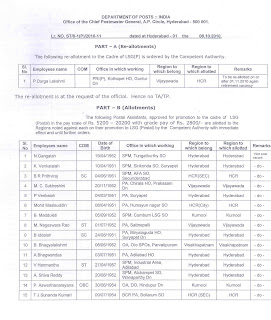 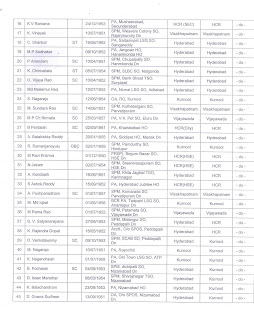 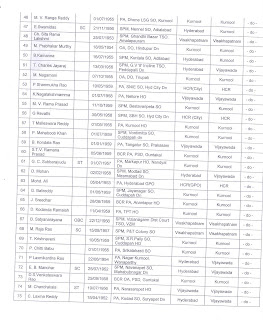 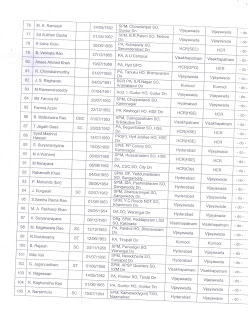 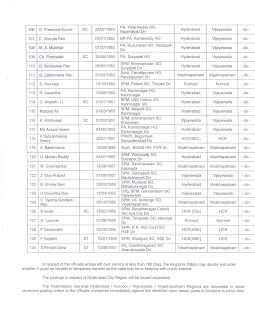 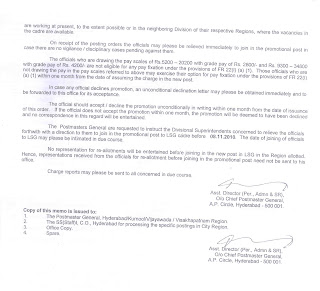 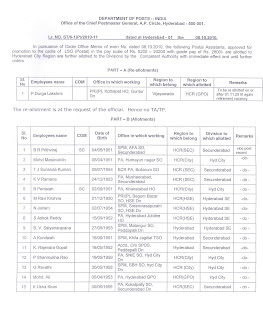 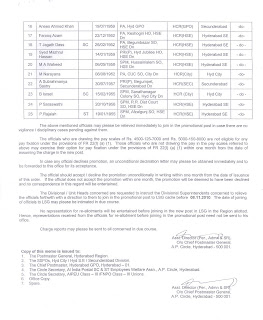 Posted by aipeup3ap.blogspot.in at 6:27 PM No comments:

Today a meeting was held with CPMG with the delegation of our union.The out come of the meeting is satisfactory and both the parties reached to an aggrement. CPMG had issued the orders to the concerned as demanded by this union. In view of the out come of the meeting It is decided to differ the trade Union Agitation programme going to be held from Monday.Copy of the aggrement is placed here for the information of the members. 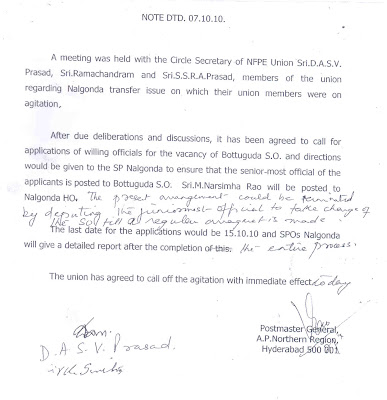 Posted by aipeup3ap.blogspot.in at 4:10 PM No comments:

Click here to get the official minutes of 2nd MACP Meeting
Posted by aipeup3ap.blogspot.in at 1:12 PM No comments:

Circle wise All India Marks list of all the candidates who appeared in the IPO examination 2009 held fro 04 to 06 January 2010 may be down loaded by clicking the below link.


The Emergent Circle Working Committee was held on 03./10/2010 at B1,P&T Quarters, Chikkadpally,Hyderabad-20, under the presidentship of Com.K.Narayan Rao, President of the Circle Union. The Circle working Committee discussed and review the 07/09/2010 one day token Strike and also problems pertaining to Hyderabad Region particularly Nalgonda Division irregular transfers ordered by the PMG APNR. After thorough discussion it was decided to support the agitation morally continuing the agitation in Nalgonda Division.. In addition to this the following resolutions have been taken unanimously.
1.Dharna programmes will be taken up on 11/10/2010 by the union if the problem will not be settled by end of this week.
2.On problems of Hyderabad Region, after discussing with P-IV and ED a detailed Programme will be chalked out for execution.
3.A resolution has been passed and sent to CPMG on 04/10/2010 to resolve the issue.

All the Branch/Divisional Secretaries are requested to mobilise the staff and members to conduct Dharna Programme on 11/10/2010. A Copy of Resolution is placed here for the information of the members. Posted by aipeup3ap.blogspot.in at 9:52 AM No comments:

Dear Comrades,
Department of Posts has released order today for 60 days Bonus for regular employees as well as for Gramin Dak Sewak subject to the ceiling of Rs. 3500/- and Rs.2500/- respectively 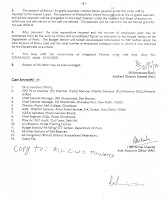 Posted by aipeup3ap.blogspot.in at 7:24 PM No comments:

Dear Comrades,
Department of Pensions and Pensioners Welfare decided to revision of Pre 2006 pensioners/family pensioners coming under the category of Central Civil Services (Extraordinary Pension) Rules/Liberlized Pensionary award scheme, on the lines of benifits sanctioned for ordinary pensioners/family pensioners vide memo No.45/3/2008-P&PW(F) dated 30/09/2010. The same is placed here for the information of the members.Please click the below link and down load.