The undersigned is directed to say that issue of removal of ceiling of Rs.1 lac in single savings account and Rs.2 Lac in Joint Savings Account fixed in the year 2000 was under consideration in the Min. of Finance (DEA). This issue was linked to the benefit of exemption in Income Tax on the interest earned in Post Office Savings Account under Section10(15) (i) of Income Tax Act, 1961 by the CBDT and Min. of Finance (DEA). After sustained efforts on the part of this Directorate, Min. of Finance (DEA) has now amended Rule-4 of the Post Office Savings Account Rules 1981 vide G.S.R.681(E) F.No.2/5/2006-NS-II dated 15.9.2011 (copy enclosed). Some major benefits of this amendment are given below:
(i) From 1.10.2011, there will be no limit for retaining balance in single as well as joint savings account.
(ii) A depositor or depositor(s) can deposit any amount into single as well as joint savings account.
(iii) Maturity value of any savings instrument can be credited into savings account of the depositor standing in the same post office irrespective of the balance in the account.
(i) Any cheque either issued by Postmaster or any other authority irrespective of any amount can be credited into post office savings account irrespective of the balance in the account.
(ii) From the Financial year 2011-12, Interest income of Rs.3500/- in the case of single account and Rs.7000/- in case of Joint account will be exempted from Income Tax. (Section 10(15) (i) of Income Tax Act, 1961 amended vide Notification No. 32/2010 {F.No. 173/13/2011-IT A.I}/S.O.1296(E) dated 03.06.2011)
(iii) It is the duty of the depositor(s) to show the interest income earned from Post Office Savings Account(s) beyond the limit prescribed above in the Income Tax return and pay due Income Tax.
1. It is requested that all field units may be directed to give wide publicity to these changes in the shape of Public Notice and printing of leaflets.
2. This issues with the approval of DDG(FS).
Yours faithfully,
(Kawal Jit Singh)
Assistant Director (SB)
Posted by aipeup3ap.blogspot.in at 10:23 AM No comments:

Clickhere for Bonus orders if you are unable to get print from the below orders
Posted by aipeup3ap.blogspot.in at 5:07 PM No comments:

The Orders for payment of PLB for Postal Employees have been issued today evening. It will be 60 Days. The maximum ceiling will be Rs.3500/- for Regular Employees; Rs.2500/- for GDS; and Rs.1200/- for Casual including Temporary Status Casual Labourers.


Posted by aipeup3ap.blogspot.in at 4:23 PM No comments:

Dear comrades,
DOPT issued orders to revise Special Allowance and Cash Handling Allowance vide Memo No.4/6/2008-Estt.(Pay II) dated 13/09/2011. According to the order "the OM NO.4/6/2008-Estt.(Pay II) dated 01/10/2008 states that the rates of special Allowance and Cash Handling Allowance will be automatically incresed by 25% every time the Dearness allowance payable on revised pay scales goes up by 50%"
Click here to get the order copy
Posted by aipeup3ap.blogspot.in at 10:39 PM No comments:

Union Governement issued Gazzet notification to ammed CCS (Leave) Rules 1972 vide notification dated 26/08/2011. According to third ammendment
"38-A. Encashment of Earned Leave along with Leave Travel Concession
while in service. -
(1) A Government servant may he permitted to encash earned leave up to ten days at the time of availing of Leave Travel Concession while in service, subject to the conditions that -
(a) a balance of atleast thirty days of earned leave is available to his credit after taking into account the period of encashment as well as leave being availed of:
(b) the total leave so encashed during the entire career does not exceed sixty clays in the aggregate;
(2) The cash equivalent for encashment of leave under sub-rule (I) shall he calculated
(3) No House Rent Allowance shall he included in the cash equivalent calculated under sub-rule (2);
(4) The period of earned leave encashed shall not he deducted from the quantum of leave that can normally be encashed by the Government Servant under rules 6.
39, 39-A, 39-H, 39-C and 39-D:
(5) If the Government Servant fails to avail the I .eave Travel Concession within the time prescribed under the Central Civil Services (Leave Travel Concession) Rules, 1988, then he shall be required to refund the entire amount of leave so encashed alongwith interest at the rate of two percent above the rate of interest
allowed by the Government as applicable to Provident Fund balances and shall also he entitled for credit back of leave so debited for leave encashment.'".
Click below link for orders
http://circulars.nic.in/WriteReadData/CircularPortal/D2/D02est/14028_1_2010-Estt.-Leave-26082011.pdf
Fourth Ammendment
43-C( I). Subject to the provisions of this rule, a woman Government servant may he granted child care leave by an authority competent to grant leave for a maximum period of 730 days during her entire service for taking care of her two eldest surviving children, whether for rearing or for looking after any of their needs, such as education, sickness and the like.
(2) For the purposes of sub-rule ( 1 ). "child" means-
(a) a child below the age of eighteen years: or
(h) a child below the age of twenty-two years with a minimum disability of forty per cent as specified in the Government of India in Ministry of Social Justice and Empowerment's Notification No.16-18/97-N1.1, dated the l'June, 2001.
(3) Grant of child care leave to a woman Government servant under subrule
(I) shall he subject to the following conditions, namely:-
(i) it shall not be granted for more than three spells in a calendar year;
(ii) it shall not be granted for a period less than fifteen days at a time; and
(iii) it shall not ordinarily be granted during the probation period except in case of certain extreme situations where the leave sanctioning authority is satisfied about the need of child care leave to the probationer.
Provided that the period for which such leave is sanctioned is minimal.
(4) During the period of child care leave, the woman Government servant shall he paid leave salary equal to the pay drawn immediately before proceeding on leave.
(5) Child care leave may be combined with leave of any other kind.
(6) Notwithstanding the requirement of production of medical certificate contained in sub-rule (I) of rule 30 or sub-rule (I) of rule 31, leave of the kind due and admissible (including Commuted Leave not exceeding sixty days and Leave Not Due) tipto a maximum of one year, if applied for, he granted in continuation with child care leave granted under sub-rule (I ).
(7) Child care leave shall not he debited against the leave account.'
Click below link for order copy
http://circulars.nic.in/WriteReadData/CircularPortal/D2/D02est/13018_4_2011-Estt.-Leave-27082011.pdf
Posted by aipeup3ap.blogspot.in at 2:51 PM 1 comment:

It is here by clarified vide memo No.1/2/07-P&PW(E) dated 02/09/2011that in case the deceased government servant is not survived by a widow/widower or a child, the dependent parents become ditectly eligible to receive family pension. In case where a deceased Government servant is survived by a widow/widower or a child, and the position changes subsequently because of death or re-marriage of the spouse and/or death or ineligibility of child/children including a disabled child, the dependent parents become eligible for family pension. However, in terms of this deparment's OM No.38/37/08-P&PW (A) dated 02/09/08, a childless widow subject to dependency criteria, is entitled to the family pension even after her re-marriage. In such an event, the parents of the deceased employee becom entitled to the family pension only after the childless widow dies or when her independent income from all other sources becomes equal to or higher than that prescribed for dependency criterion under the Rules.
Click here to get order copy
Posted by aipeup3ap.blogspot.in at 10:30 AM No comments:

Dear Comrades,
DOPT issued fresh guidelines on grant of family pension to the eligible member of the family of a pensioner vide Memo No.F.No.1/17/2011-P&PW(E) dated14/09/2011. The order clarifies as follows
It is hereby clarified that as the previous instructions did not make any distinction between the gevernment servant and the pensioner, the family pension to teh family of a missing pensioner would accrue with effect from the date of lodging the FIR or from to the date immediately succeeding the day till pension had been last paid to the pensioner, whichever is later. Accordingly, arrears in past cases would also be admissible.
Click here for orders
Posted by aipeup3ap.blogspot.in at 10:13 AM No comments:

The Union Cabinet today approved to increase Dearness Allowance by 7% to Central Government employees.The rate of Dearness allowance shall be enhanced from the existing rate of 51% to 58%.
Revised rates effective from 1.7.2011. Orders will be issued by Finance Ministry in next week.
Posted by aipeup3ap.blogspot.in at 2:13 PM No comments:

Dear Comrades,
Due to prevailing situation in Hyderabad in connection with Telangana Agitation Mass Dharna going to be held on 19/09/2011 at Dak Sadan, Hyderabad is Postponed. The revised dates will be intimated soon.
Posted by aipeup3ap.blogspot.in at 2:05 PM No comments:

Dearness allowance for Central Government employees may be announced on 15th September, 2011

Dear Comrades,
Bonus and D.A. for central staff may be announced on 15th September.According to reliable sources, the Cabinet may consider the proposal of hike of 7% Dearness Allowance w.e.f 01.07.2011 and diwali bonus to Central staff day after tomorrow, the 15th September
Posted by aipeup3ap.blogspot.in at 8:34 PM No comments:

To
All Circle Office Bearers
All Branch/Divisional Secretaries
As per the Programme of Action against the Contributory Negligence call given by Circle Union Mass Dharna is going to be held on 19/09/2011 at Dak Sadan, Hyderabad. It is requested to all of you to mobilise rank and file and make 19/09/2011 Dharna a grand Success.
Posted by aipeup3ap.blogspot.in at 12:13 PM No comments: 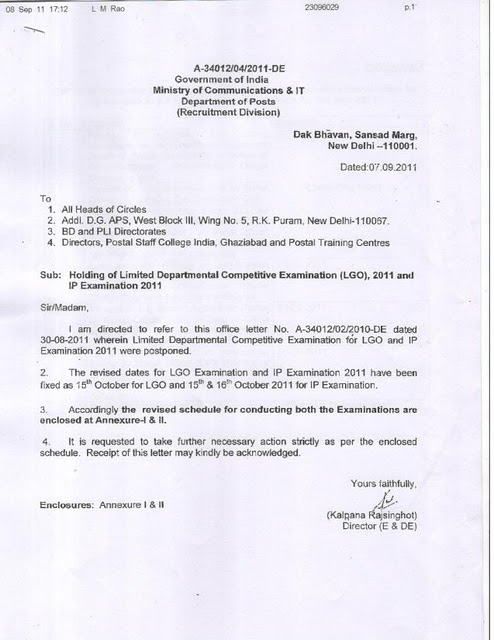 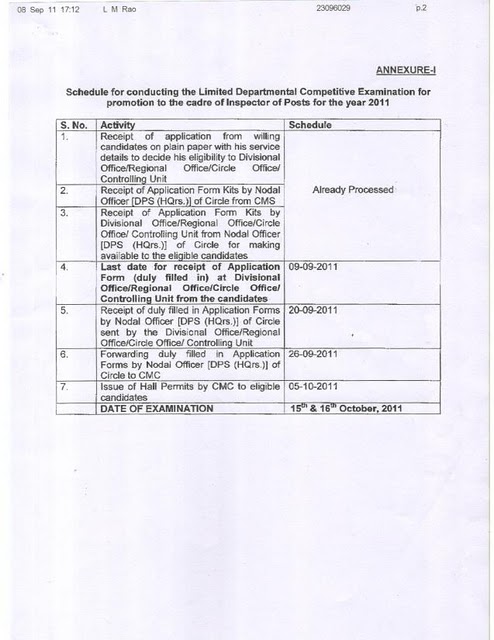 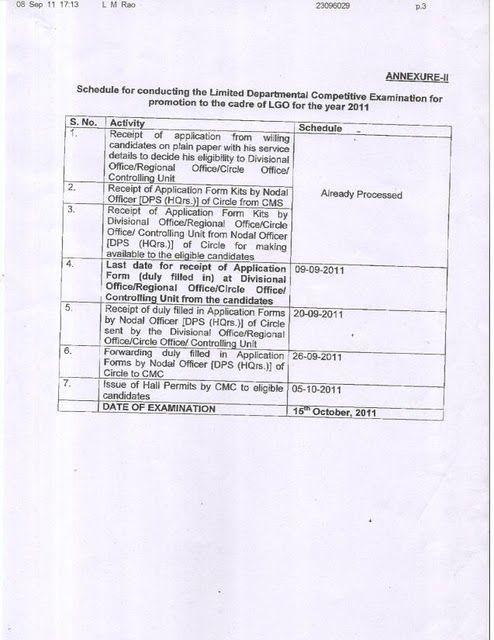