Sub: Limited Departmental Competitive Examination for Postmaster Grade – I – Crucial date for deciding the qualifying service for the Examination – regarding
Sir/ Madam,

I am directed to refer to Directorate’s letter No: A-34012/ 3/ 2011-DE, dated 13.04.2011 regarding conduct of Postmaster Grade I Examination, 2011 to be held on 12.06.2011 for the existing vacancies in Postmaster Grade-I.
2. Clarification has been sought by certain Circles regarding the crucial date for assessing the eligibility of Postal Assistants for appearing in the Postmaster Grade-I Examination, 2011 to be held on 12.06.2011.
3. The matter has been examined in the Directorate. As per the Directorate’s order No. 13-2/2010-PE.1 dated 25.11.2010, the General line posts would be deemed to have been designated as Postmaster Grade-I, Postmaster Grade-II and Postmaster Grade-III with effect from the dates those are filled up. Therefore it has been decided by the competent authority that the crucial date for assessing the eligibility of the candidates for the purpose of Postmaster Grade-1 Examination 2011, to be filled up on the basis of Limited Departmental Competitive Examination would be the closing date for dispatch of the applications by nodal officers to CMC, ie.18.05.2011. Such Circles, who have prescribed the crucial date other than 18.05.2011, are advised to issue another circular calling for the applications from only such officials, who have become eligible during the period 01.01.2011 to 18.05.2011, by asking them to apply by 2nd June, 2011. Due to paucity of time, the Circles on receipt of applications shall issue hall tickets to the eligible candidates to appear in the examination after consulting the CMC telephonically regarding the Roll Number(s) to be assigned and the venue for examination. It should be immediately followed by a written communication to CMC indicating the names, Roll Numbers so assigned along with a copy of the application submitted by the candidates. In case of any contingency, the Circles may contact DDG(RP) [Tel. No: 23096101]
4. Further, according to the Dept of Personnel & Training OM No: 22011/3/98-98-Estt. (I) dated 17.09.1998, the crucial date for determining eligibility of officers for promotion in case of financial year-based vacancy year would fall on January 1st immediately preceding such vacancy year, the first of the vacancy year, ie. January 1st itself would be taken as the crucial date irrespective of whether the ACRs are written financial year wise or calendar year wise. As such, the crucial date for determining eligibility of Postal Assistants for appearing in the Postmaster Grade-1 Examination to be conducted in the subsequent years ie during the year 2012 and thereafter would be 1st January of the year, to which the vacancies pertain to.

Posted by aipeup3ap.blogspot.in at 2:32 PM No comments:

If the Gradation list was prepared before 04.11.92, the date of confirmation is correct. But when, it is constructed now, how the confirmation can be taken when it was declared illegal by Supreme Court and Government had also dropped the earlier procedure.
When the Department has not prepared any Gradation list after the introduction of TBOP/BCR at Circle level since 1983, and constructing now how it can apply the old procedure? Will it not be against to the spirit of Supreme Court judgment and Government orders.
Click here to get the order copy
Posted by aipeup3ap.blogspot.in at 10:31 PM No comments:

Notional Promotion can be granted to those vacancies Which were available prior to 07.02.2002

The clarification issued by the Department vide its letter No. 9-15/2008-SPB-II dt. .03.2011 with regard to promotion in LSG (Accounts) is reproduced in the following link for the consumption of all viewers.

Unless, the APM Accounts posts are brought under LSG more, there is no use of such clarifications. When there is lesser posts in LSG APM Accounts and more in HSG-II, where is the possibility of according LSG promotions. The cadre review is the only thing which can render justice to the aggrieved accounts line officials.

Posted by aipeup3ap.blogspot.in at 10:27 PM No comments:

To
All Circle office Bearers
All Divisional/Branch Secretaries


As per the call given by the National JCA consisting of FNPO&NFPE you are here by directed to participate in dharna going to be held on 25/05/2011 in front of all the divisional offices.It is requested to participate in large number and make it grand success.
Posted by aipeup3ap.blogspot.in at 5:12 PM No comments:

MACP clarification by the Directorate 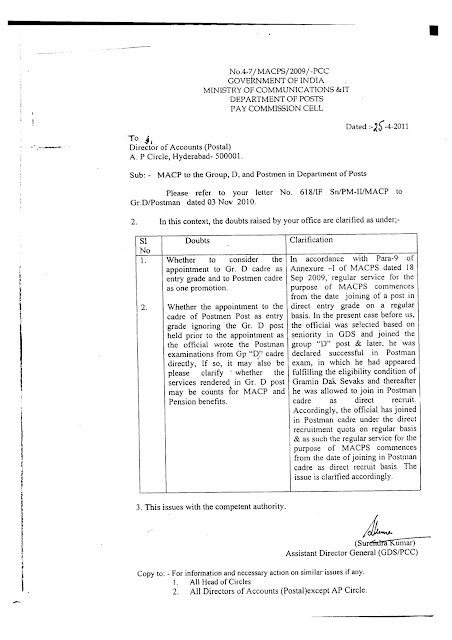 Get ready for immediate strike if situation warrants-NFPE Latest Circular

NFPE
national federation of postal employees
ist floor, north avenue post office, new delhi – 110001
urgent circular
get ready for immediate strike if situation warrants
strike date will be advanced if department go ahead with
implementation of mckinsey reforms:
five lakhs postal employees of india post in one voice declare:
indefinite strike from 2011 July 5th
in 1946 july entire p&t employees went on indefinite strike against the British imperialism
in 2011 july entire postal employees are going ahead for another indefinite strike against the imperialist globalization policies and the us-based mckinsey reforms in india post
we don’t want the foreign consultant to decide our fate
mckinsey is for privatisation of india post
we shall oppose it lock stock and barrel
we are ready to sacrifice to save india post
prepare for a determined and uncompromising struggle
make the may 25th dharna programme a grand success.
organise circle level joint conventions of nfpe & fnpo
participate in the june 19th all india joint convention at chennai.

Posted by aipeup3ap.blogspot.in at 8:45 PM No comments:

Dear comrades,
After Vigorouse efforts by the Circle Union, with the circle office , Finally the CPMG has agreed to send new recruits for Practicle training from 23/05/2011 by the concerned recruiting units. After Completion of Practicle Training they will be temporarily absorbed and they will go for theoriticle training at PTC Mysore  as and when the vacancies arises. 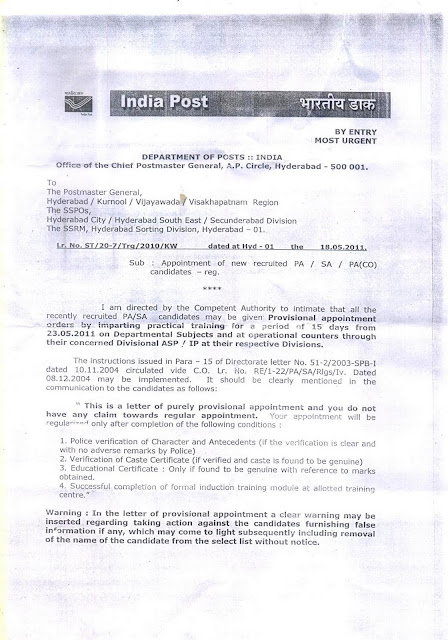 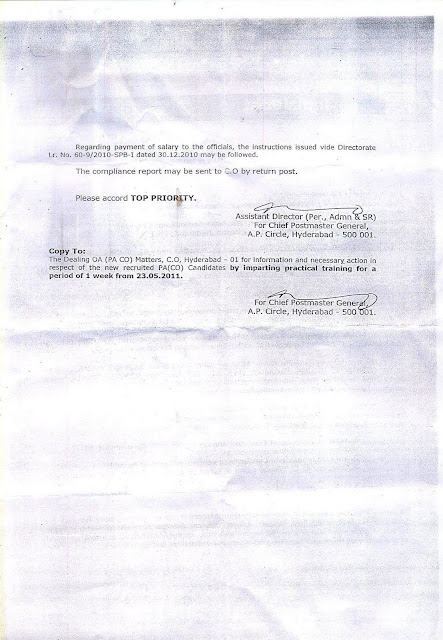 Posted by aipeup3ap.blogspot.in at 5:51 PM 2 comments: 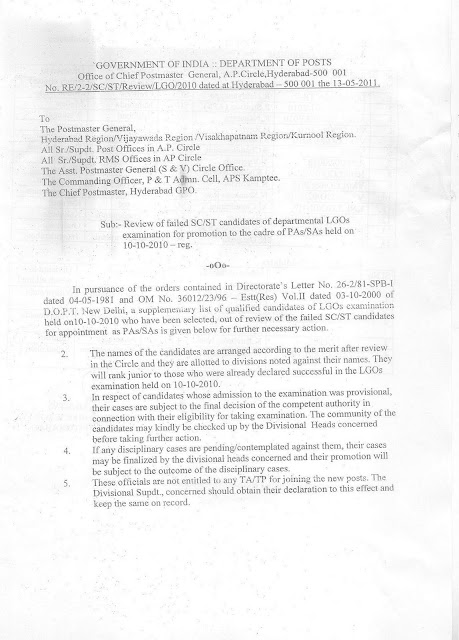 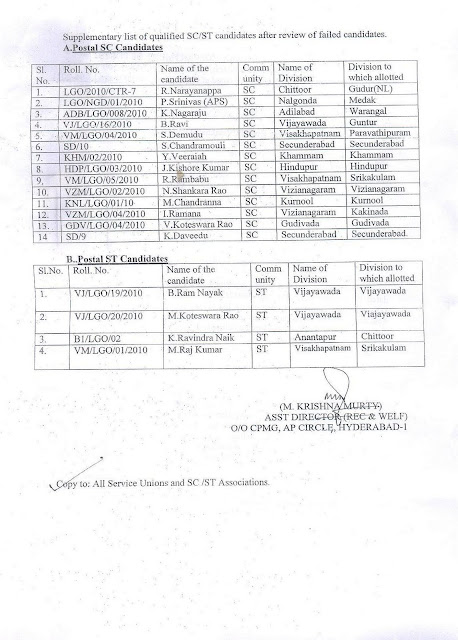 Posted by aipeup3ap.blogspot.in at 4:25 PM No comments: 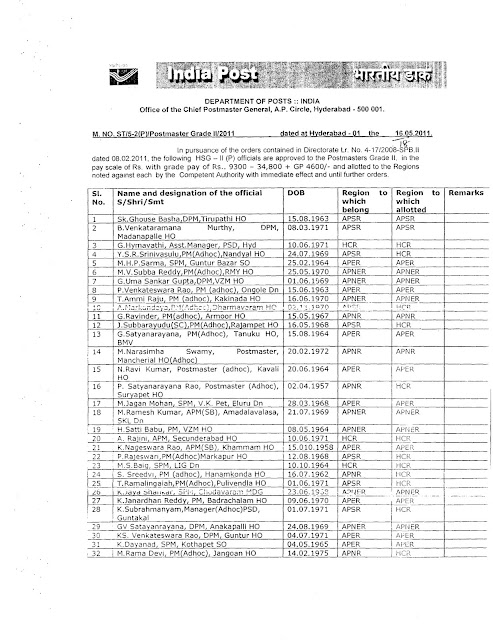 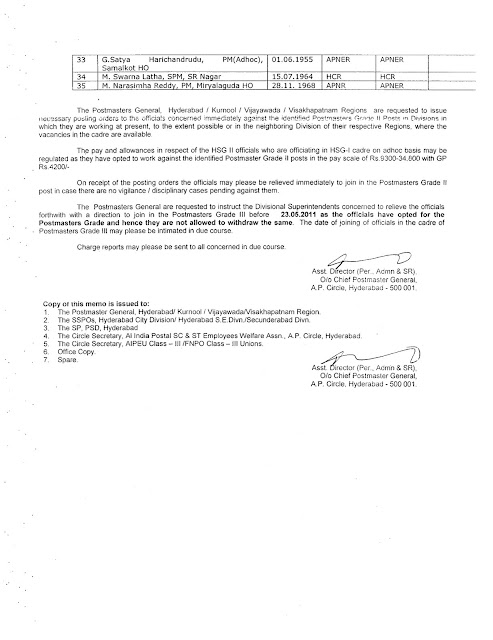 Posted by aipeup3ap.blogspot.in at 4:23 PM 2 comments:

In the wake of recent decision by the directorate (dated 04/05/2011) with flimsy reason, AIPEU P-IV A.P.Circle CWC taken a decision to go on trade union action in protest against the orders.The decision of the AIPEU P-IV A.P.Circle CWC is endorsed by the Circle Co-ordination Committee of NFPE unions.Hence it is requested to mobilise the Rank and File to participate in the protest against the orders of the directorate i.e. abolition of Sorting Postman cadre. The following Programme of action is announced by the Circle unions.
1.Demonstration in front of Concerned Divisional Offices in A.P.Circle on 19/05/2011
2.Dharna Programme in front of Concerned Divisional Offices in A.P.Circle on 20/05/2011
Comrades, earlier we were participated Trade Union actions and Programmes for enhancement and betterment of working conditions, but now we are struggling for the survival of the cadre and Posts. Do not give a chance to the administration to take the decisions against the interests of the workers.
Posted by aipeup3ap.blogspot.in at 6:21 PM No comments: 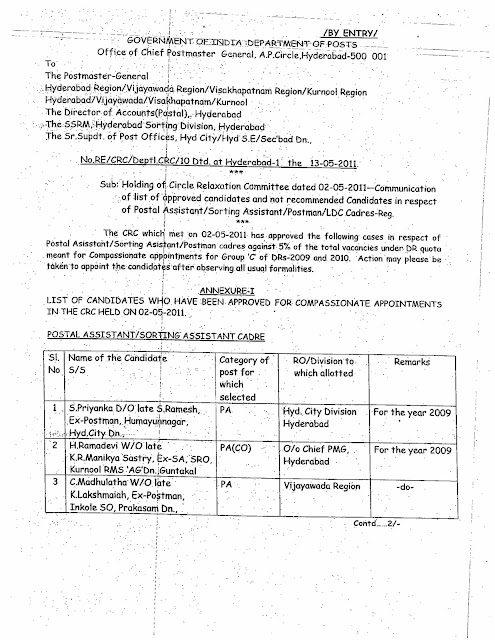 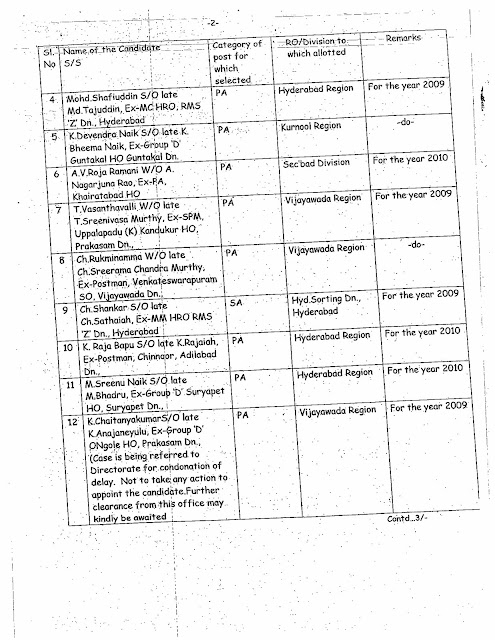 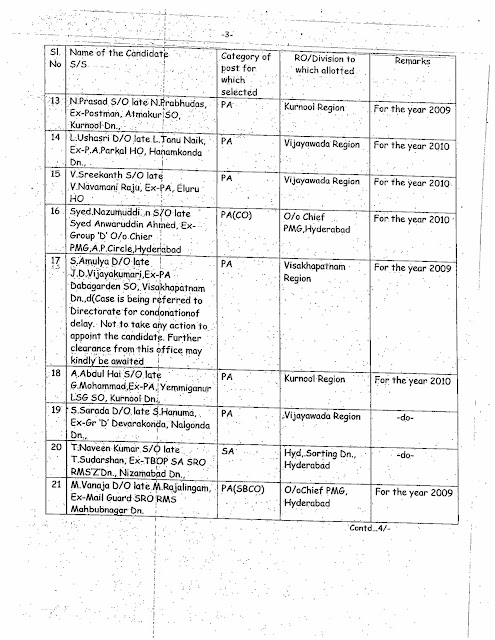 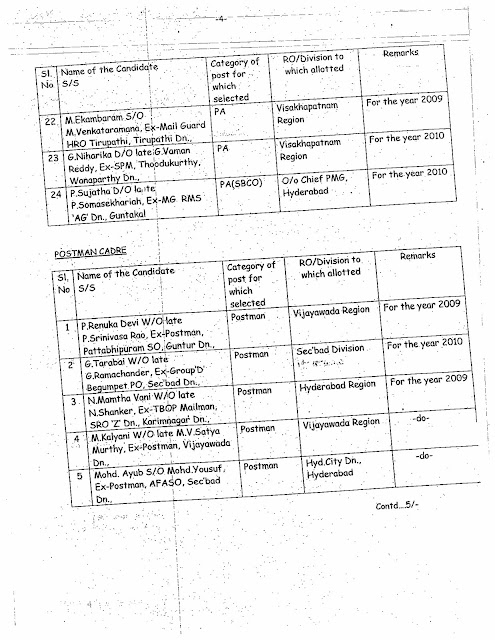 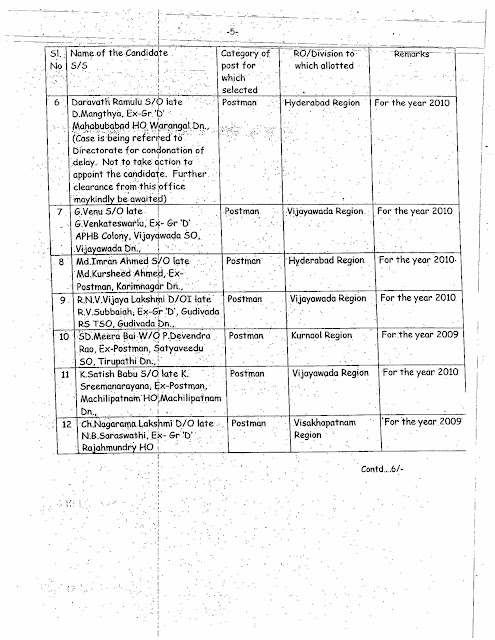 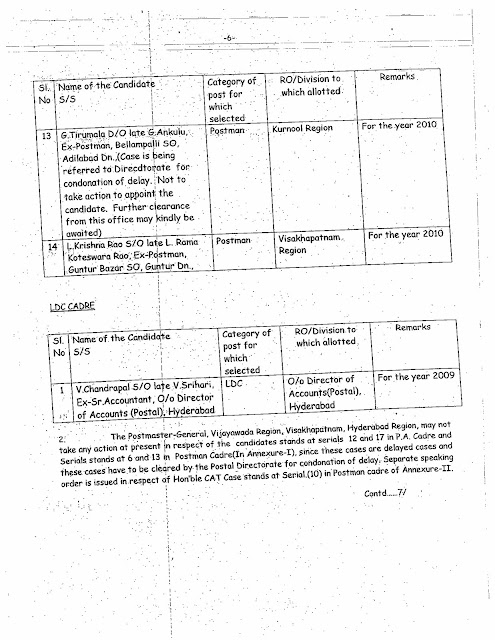 Posted by aipeup3ap.blogspot.in at 6:09 PM No comments: 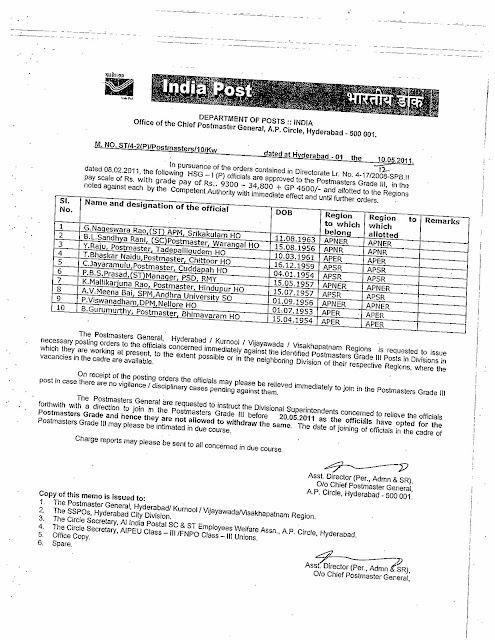 Posted by aipeup3ap.blogspot.in at 6:00 PM No comments: 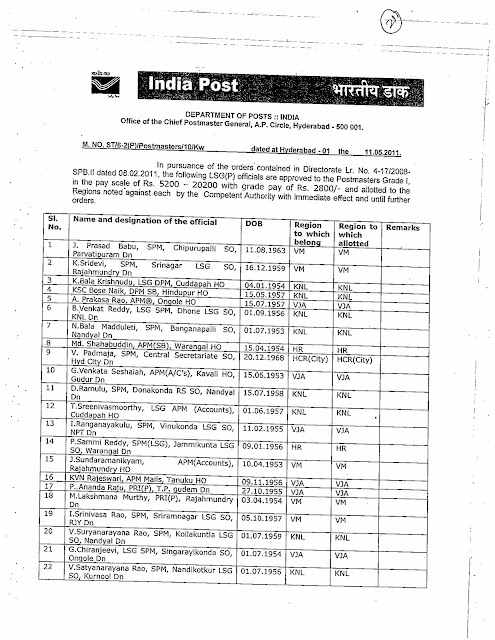 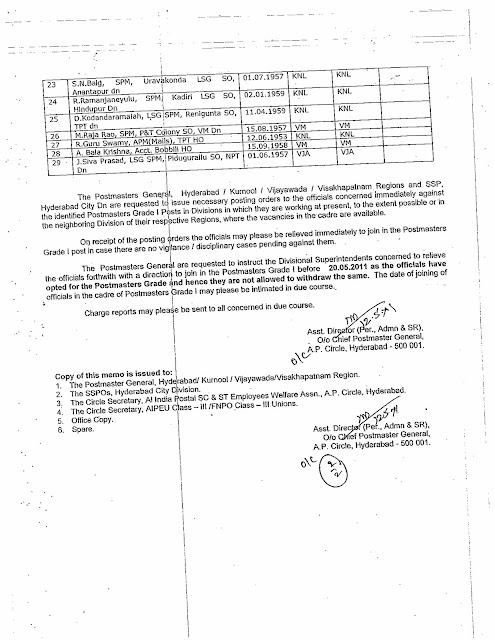 Posted by aipeup3ap.blogspot.in at 5:58 PM No comments:

Re designation of Sorting Postman Post as Postman-Directorate issued orders 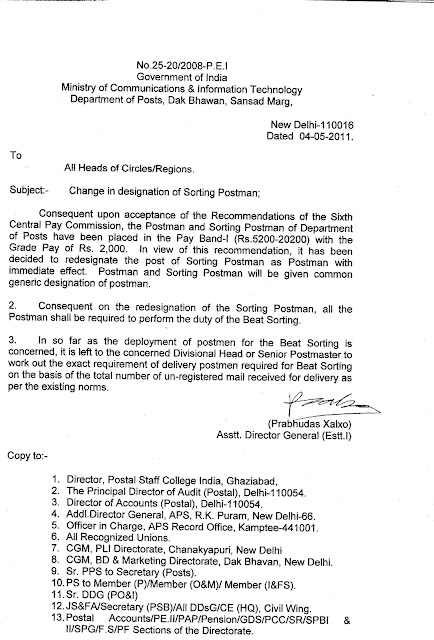 Posted by aipeup3ap.blogspot.in at 7:11 PM No comments:

Clarification on Increase in certain allowances by 25% as a result of enhancement of DA w.e.f. 01/01/2011-Orders issued by DOPT

These revisions are applicable with effect from 1' January, 201 1

For order copy Please Click here
Posted by aipeup3ap.blogspot.in at 4:38 PM No comments:

May Day Greetings to All

Dear Comrades,
Salute the Red Flag’ Observe the May Day.
Remember and honour the martyrs who died to make the lives of their fellowmen better and free from Exploitation. Let every worker contribute his/her mite to advance the cause interest of the worker
Long Live May Day
Posted by aipeup3ap.blogspot.in at 1:11 PM No comments:
Newer Posts Older Posts Home
Subscribe to: Posts (Atom)