Dear Comrades,
Clarification issued by the DOPT in respect of Children education Allowance vide Memo No.21011/16/2009-Estt.(AL) dated 17/06/2011 on the follwing issues.
1.The Reimbursement of CEA is admissible only for the first child born after failure of Sterilization operation.
2.It is clarified that a Govt.Servant is allowed to get 50% of the total amount subject to the overall annual ceiling in the first quarter and the remaining amount in third and or fourth quarter.Front loading of the entire amount in the first and second quarters is not allowed.
Click here to get the order copy

Posted by aipeup3ap.blogspot.in at 5:35 PM No comments:

Dear Comrades,
A circular issued by the Finance Ministry dated 23/06/2011 is reproduced here for the information of the members.


The Central Board of Direct Taxes has notified the scheme exempting salaried taxpayers with total income up to Rs.5 lakh from filing income tax return for assessment year 2011-12, which will be due on July 31, 2011. Individuals having total income up to Rs.5,00,000 for FY 2010-11, after allowable deductions, consisting of salary from a single employer and interest income from deposits in a saving bank account up to Rs.10,000 are not required to file their income tax return. Such individuals must report their Permanent Account Number (PAN) and the entire income from bank interest to their employer, pay the entire tax by way of deduction of tax at source, and obtain a certificate of tax deduction in Form No.16. Persons receiving salary from more than one employer, having income from sources other than salary and interest income from a savings bank account, or having refund claims shall not be covered under the scheme. The scheme shall also not be applicable in cases wherein notices are issued for filing the income tax return under section 142(1) or section 148 or section 153A or section 153C of the Income Tax Act 1961.
Click here to get the circular copy
Posted by aipeup3ap.blogspot.in at 7:59 PM No comments:

Postal Directorate has been announced PSS Group-B 2011 examination held on 29/05/2011 vide Memo No.A-34012/01/2011-DE dated 23/06/2011.The same is placed here for the information of the members.The following officials from Andhra Circle were cleared the above examination successfully.The results of the exqmination are subjected to the outcome of the pending cases in various CAT Benches,/other Courts, The informotion relating to these candidates is not disclosed as the matter is subjudice.
IP Line
1.A.Subrahmanyam
General Line.
1.Siva Venkateswara rao Kande
2.Hymavathi Gollamudi
3.Malladi Hari Prasad Sarma
4.SatyaHarischandrudu Gumpu
5.Janapala Prasad Babu
6.B.Narasappa (SC)
7.Ponnuru Viswanadham(ST)

Click here to get the Directorates order copy
Posted by aipeup3ap.blogspot.in at 10:33 PM No comments:

Posted by aipeup3ap.blogspot.in at 11:29 AM No comments:

Review and Recommendation on Commission paid to Agents

The Committee therefore recommends that under PPF, the commission should be abolished. Under PPF, 90% of the transactions are happening through banks and for banks commission is not payable for any other scheme of theirs. The Committee feels that 4% commission under MPKBY is very high and is affecting the viability of NSSF. The Committee recognises that the RD scheme requires considerable effort on part of agents in mobilising monthly deposits. However, 4% commission is distortionary and expensive. The committee recommends that this should be brought down to 1% in a phased manner in a period of three years with a 1% reduction every year. Under SAS, while the commission for senior citizen saving scehme is 0.5%, it is 1% on other scheme. The Committee recommends that while commission should be abolished on Senior Citizen Saving Scheme, on other schemes, it should be brought down to 0.5%.
Although most of the State Governments have already abolished the commission being paid by them, some states are still paying commission to agents in their state. This creates distortion in operation of the scheme and needs to be discouraged, as recommended by 13th FC. In order to ensure that the State Governments do not give any extra incentive to the Agents, the Committee recommends that the incentive paid to the State Government may be reduced from the incentive payable by the Central Government to the Agents.
Click here to get the copy of the report
Posted by aipeup3ap.blogspot.in at 10:06 PM No comments:

Details of Post Offices Identified in A.P.Circle for deployment of Postmasters Grade-III 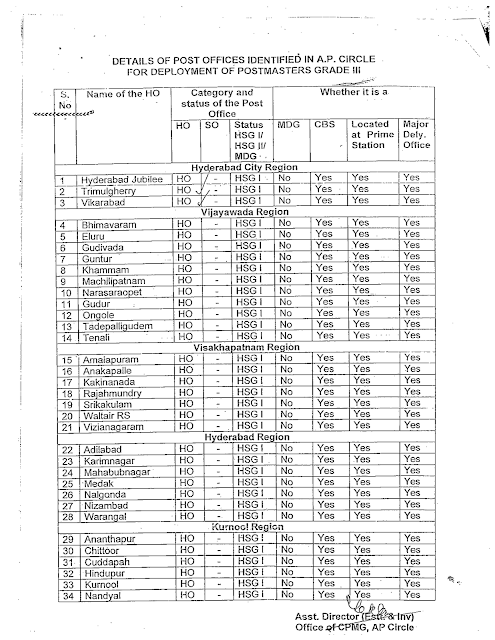 Posted by aipeup3ap.blogspot.in at 5:21 PM No comments:

Dear Comrades,
Some of the Applications of Postmaster grade-I examination were rejected due to non submission of the applications in time by the regional offices even though the Divisions sent intime to RO.Many complaints were received by the circle union in this regard.Circle Union had taken up the matter with the circle administration seriously. Finally today a meeting was convened and accepted to allow them for examination.All the eligible applicants will get the Hall Permits soon.This is for your information.
Posted by aipeup3ap.blogspot.in at 4:06 PM No comments: 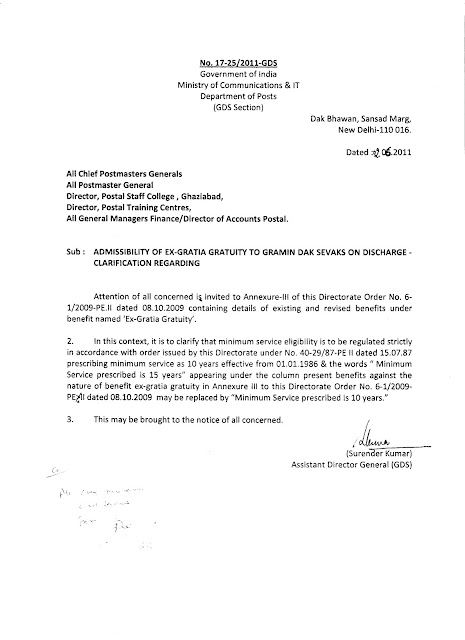 Posted by aipeup3ap.blogspot.in at 8:08 AM No comments:

Transfers of Junior Administrative group Officers - orderd by the Directorate

Click here to get the order copy
Posted by aipeup3ap.blogspot.in at 4:59 PM No comments:
Newer Posts Older Posts Home
Subscribe to: Posts (Atom)