Enhancement of Fixed Medical Allowance to C.G.Pensioners from Rs.100 to Rs.300

Dear Comrades,
Ministry of Personel,Public Grevances and Pensions, Department of Pensions and Pensionerw welfare has been enhanced Fixed medical allowance to Central government Pensioners residing in areas not covered under CGHS from Rs.100 p.m. to Rs.300 p.m. w.e.f  01/09/2008 vide Memo No.4/25/2008-P&PW (D) dated 26/05/2010. For full text of the order copy please click the below link and down load.

Membership Verification and collection of Adds to Federal Council

To
All Circle Office Beares and
Divisional/Branch Secretaries

The Process of verification of membership has been concluded at our end. I appealed earlier to send fresh membership data submitted to your unit officer and how many of them validated.But some of the Divisions/Branches have not furnished membership details yet. Once again I appeal you to please send the information immdiately to Circle Head Quarters either e-mail/Phone or by post.

Federal Council meeting is going to be held in the month of June 2010 as scheduled.Hence it is requested to please send the amount collected towards advertisements in Souvenir, which is released in connection with Federal Council meeting.
Posted by aipeup3ap.blogspot.in at 5:21 PM No comments:

Modified orders in respect of Surplus Qualified LGO Candidates to the Cadre of PA/SA Issued by C.O. on 21/05/10 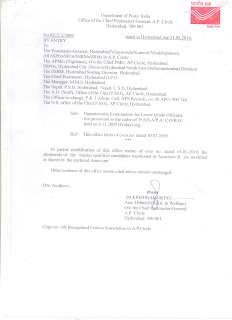 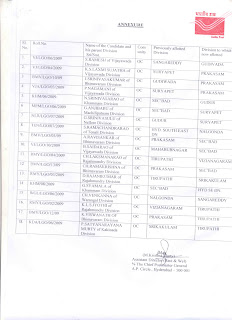 In partial Modification of C.O.Memo of even No. dated 10/03/2010, The allotments of the surplus qualified candidates (Departmental Examination fo LGOs for promotion to the cadre of PAs/SAs held on 06/11/2009)mentioned in Annexure-II are modified as shown above vide Memo No.RE/2-2/2009 dated 21/05/2010.
Posted by aipeup3ap.blogspot.in at 10:31 AM No comments: 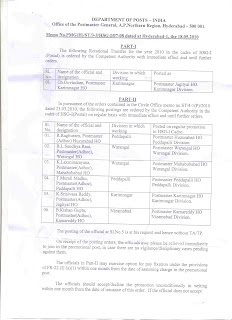 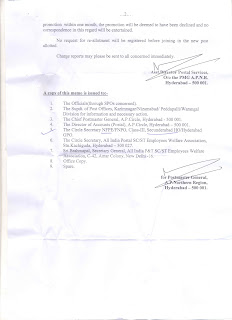 HSG-I Postings of Hyderabad Region was issued by PMG Hyderabad vide Memo No.PMG(H)/ST/3-3/HSG-I/07-08 dated 18/05/2010.The orders have been placed here for the information of the members.
Posted by aipeup3ap.blogspot.in at 10:34 AM No comments:

Dear Comrades,
Comrade Moni is no more, A Legendary leader Passed away. On behalf of AIPRU Group-C, A.P.Circle I convey my deepest Condolences to the Family members of Com.Moni. With his demise our Trade union and workers family lost a great leader. Circle Head Quarters dips its flag to observe mourning.He served the NFPTE and BSNLEU in deferent posts.He breathed his last breath at 10.45 on 19/05/2010 at Kolkata.
Posted by aipeup3ap.blogspot.in at 10:28 AM No comments:

Proposed DOPT Note on need for Review of Disciplinary Proceedings

It is requested to the CHQ and Federation to examine the Proposed Note and deal properly with the matter to protect the legitimate rights of the workers.
Posted by aipeup3ap.blogspot.in at 5:39 PM No comments:

Dear Comrades,
Postal Directorate issued clarification regarding Consideration of ACRs and Application of Benchmarks for notional Promotion in LSG/HSG-II/HSG-I/Financial upgradation under TBOP/BCR Scheme vide Memo No.F-137-16/2010-SPB-II dated 17/05/2010. The same is placed here for the information of the memebers.

Please click here for full text of the order copy
Posted by aipeup3ap.blogspot.in at 11:22 AM No comments:

Dear Comrades,
On Introduction of Prevention of Money Laundering Act-2002 (PML)  by the Union Government, in the light of said act Postal Directorate issued fresh guide lines to be followed by all the Post Offices under their control vide Memo No.109-04/2007-SB dated 23/04/2010 (SB Order No.8/2010).The orders are placed here for the information of the members.Please click the below link and down load.

I am also placing here the Prevention of Money Laundering Act and Rulings issued by the Finance Ministry for the information of the members.

Pleaseclick here for Moneylaundering Rules
Posted by aipeup3ap.blogspot.in at 3:08 PM No comments:

Dear Comrades,
Union Government Passed Employees State Insurance (Amendment) Bill-2009 on 06/05/2010. The bill was introduced by Sri Harish Rawat. The Highlights of the Bill is as follows.
(i) The age limit of the dependants has been enhanced from 18 to 25 for the purpose of dependants’ benefit. It will benefit large number of workers.

(i) It extended social security benefits to those apprentices who are covered by Standing Orders and also to those trainees whose training is extended to misuse exemption granted to apprentice from provisions of the ESI Act.
(ii) The definition of “Factory” under Section 2(12) has been amended to facilitate coverage of smaller factories and cover all factories which employ 10 or more persons whether these are run by power or without power.
(iii) DG-ESIC is being made Chairman of Medical Benefit Council to improve quality of medical benefits.
(iv) It enabled ESIC to appoint consultants and specialists on contract basis for better delivery of super-speciality services.
(v) The post of Insurance Inspector is re-designated as Social Security Officer to give them the role of facilitator rather than to act as mere inspectors.
(vi) The procedure for determination of contribution has been streamlined to avoid harassment of employers as the Inspectors now no more to inspect the books of accounts of the establishment beyond five years as under present system of unlimited period.
(vii) It has added the benefit for workers for the accidents happening while commuting to the place of work and vice versa
(viii) State Governments are allowed to set up autonomous organisations to give ESI Scheme benefits.

(ix) It extended medical treatment to those who retire under Voluntary Retirement Scheme or take premature retirement.
(x) It enabled ESIC to enter into agreement with any local autho rity, private body or individual for commissioning and running ESI hospitals through third party participationwherever the hospitals are not fully utilised on account of closure of factories or Insured Persons not being available.
(xi) It will improve the quality of its service delivery and raise infrastructural facilities by opening medical colleges and training facilities in order to increase its medical and Para-medical staff.
(xii) It provided for grant of exemption by appropriate Government to factories/establishments only if the employees get substantially similar or superior benefits.
(xiii) The exemptions shall be granted only prospectively as the ESIC already has made provision of infrastructure to provide service to the IPs for the past period.
(xiv) A new Chapter V-A has been added to enable provision for extending medical care to non insured persons against payment of user charges to facilitate providing of medical care to the BPL families and other unorganised sector workers covered under the Rashtriya Swasthya Bima Yojana (RSBY

Press release of the union governement may be down loaded by clicking the following link.

Holiday Homes under the Control of Directorate of Estates and CPWD

I am furnishing here with the information regarding Holiday Homes under the control of Directorate of Estates and CPWD. The Holiday Homes can be booked through online reservation or off line (Through Post). The full details of the holiday homes can be had by clicking the following links.

On opening of the above link please click on the required circle to get the details.

For on line booking of the Holiday homes please click here
Posted by aipeup3ap.blogspot.in at 4:33 PM 1 comment:

Membership Verification and Collection of Adds to Federal council Souvenir

To
All Circle Office Bearers and
All Divisional/Branch Secretaries

The Process of verification of membership has been concluded at our end. I appealed earlier to send fresh membership data submitted to your unit officer and how many of them validated.But some of the Divisions/Branches have not furnished membership details yet. Once again I appeal you to please send the information immdiately to Circle Head Quarters either e-mail/Phone or by post.
Federal Council meeting is going to be held in the month of June 2010 as scheduled.Hence it is requested to please send the amount collected towards advertisements in Souvenir, which is released in connection with Federal Council meeting.
Posted by aipeup3ap.blogspot.in at 4:38 PM No comments:

DOPT issued orders vide Memo No.AB-14017/6/2009-Estt(RR) dated 12/05/2010 to instruct all the Ministries/Departments to intimate the number of vacancies of Group-C Posts in PB-I with Grade Pay of Rs.1800/-(Pre-Revised Group-D Posts) to Staff Seclection Commission in order that the commission could initiate action for recruitment.From Now onwards All the Pre-Revsed Group-D Posts will be filled through SSC only.
http://persmin.gov.in/writedata/CircularNotification/ScanDocument/AB-14017_6_2009-Estt.%28RR%29.pdf
Posted by aipeup3ap.blogspot.in at 5:39 PM No comments: 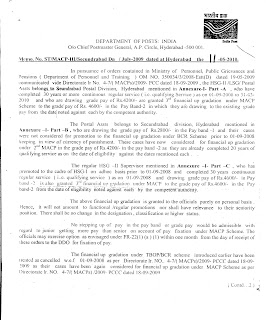 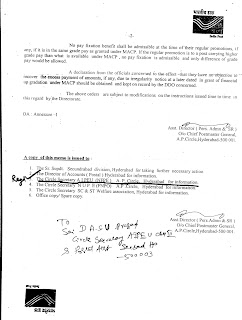 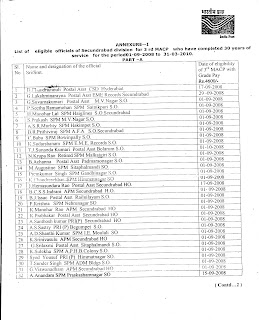 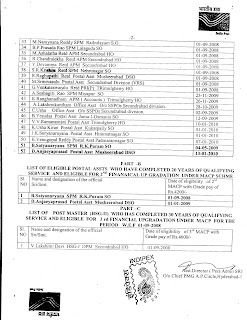 Circle Office issued MCP-III list of Secunderabad Division vide Memo No.ST/MACP-III/SEcunderabad Division/July-2009 dated 11/05/2010.On behalf of circle union i congratulate all the officials who got MACP-III financial upgradation in the list.The same is placed here for the information of the members.
Posted by aipeup3ap.blogspot.in at 10:30 AM No comments: 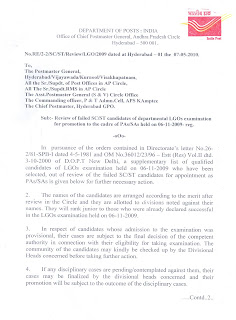 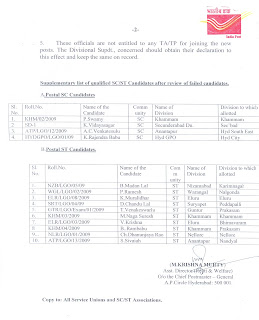 CPMG, AP Circle, Hyderabad issued a list of selected SC/ST candidates of Departmental Examination for promotion to the cadre of PAs/SAs held on 06/11/2009 vide Memo No.RE/2-2/SC/ST/Review/LGO/2009 dated 07/05/2010.The List is placed here for the information of the members.
Posted by aipeup3ap.blogspot.in at 10:21 AM No comments:

Revision of FG Bond Value and periodicity of GDS Employees

Dear Comrades,
Postal Directorate issued orders vide Memo No.6-18/2010-PE-II dated 07/05/2010 regarding revision of FG Bond value and its periodicity of GDS Employees.According to fresh orders for GDS BPMS the FG Bond value increased from Rs.10000/- to Rs.25000/- for other catogories of GDS it is from Rs.5000/- to Rs.10000/-. And the periodicity is for 5 years after expiry of current FG Bond period.All these orders have been issued in connection with implementation of one man committee headed by Sri R.S.Nataraja Murthy recommendations.

May Day Greetings to All

Dear Comrades,
May Day Greetings to All the Members and Staff.This is not a Happy Day to Celebrate, but this is a day of inspiration in rememberence of Martyrs in Continuation of our struggle for the protetion of our legitimate Rights.
Celebrate May Day
Posted by aipeup3ap.blogspot.in at 7:18 AM 1 comment:
Newer Posts Older Posts Home
Subscribe to: Posts (Atom)