Ministry of Health and Family Welfare issued notification on 27/01/2010 for Demand Survey of CGEPHIS.
Object of Demand Survey:
Government of India is contemplating introduction of a Health Insurance Scheme for C.G.Employees and Pensioners and their dependant family members all over India. Ministry of Health and Family welfare intends to assess the demand for the above scheme from the prospective beneficiaries through this survey for taking further steps in this direction.
All Central Government employees and pensioners are eligible for this survey (Inculding CGHS&CSMA).This scheme is implemented on voluntary basis for existing employees andpensioners and compulsory for futur employees and pensioners.Insurance Coverage is up to Rs.5.00 Lakhs per family per year subject to limits in any of the network hospital.The estimated annual premium for a standerd family size will be in the range of Rs.8000/- to 12000/- p.a.It is however proposed to be subsidised by the government to a considerable extent.This will be decided through bidding among insurance companies participating in the scheme.
The last date for submitting the details of the Employee/Pensioner is 15 th February 2010
For full text of the order copy and the form can be down loaded by clicking the folowing link.
http://www.mohfw.nic.in/cghs-insurance-scheme.pdf
It is requested to CHQ and Federation to look in to the matter.
Posted by aipeup3ap.blogspot.in at 12:35 PM No comments:

Dear Comrades,
DOPT Issued instructions to All The Ministries/Departments to fill up backlog reserved vacancies for persons with disabilites,  vide Memo No.36038/2/2008-Estt.(Res) dated 15/01/2010. For full text of the order please click the below link and down load. 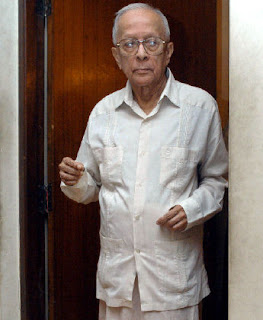 
India's Pre-Eminent Communist leader, a man of immense charisma and accomplishment, he set a record as the nation's longest serving chief minister. His faith in the people was unflinching. A life of struggle and unprecedented political success; integrity and commitment all the way. As far as Postal struggle concerned The great Leader supported all the struggles we made during the course.Especially we have to recollect RTPS Struggle in West Bengal, When he was the Chief Minister, as a CM he protected the employees right "Right to Strike" and stopped the intervention of Police Force.


ALL INDIA POSTAL EMPLOYEES GROUP-'C', AP CIRCLE DIPS ITS BANNER IN HONOUR OF THE DEPARTED LEADER
Posted by aipeup3ap.blogspot.in at 9:54 AM 1 comment:

Mo Videsh will be implemented effectively from February-Secretary (P)

Secretary (P), Radhika Doraiswamy addressed all CPMGs vide her letter No.2-8/2009-GB(Pt) dated 12/01/2010 regarding effective implementation of MO Videsh.MO Videsh software is ready and it will be sent shortly to all the CPMGs for installation.First round of training will be start from 21st and 22nd of January 2010 at PTC Mysore for Circle Administrator or Circle Resource Personnel in collaboration with partner banks as well as the technical team of PTC Mysore.Upon return, in the last week of January, Circle level trainings are to be organised at Circle Training Centers where in all concerned staff will be trained by the resource persons/System Administrator.At present the service available is for 65 countries through our partner ship with Citibank and deutsche bank.Money can also be received through partnership with these banks.In her words "This is a key service for the country since for the first time an Indian citizen can send money abroad through the Post Office".

Posted by aipeup3ap.blogspot.in at 12:41 PM No comments: 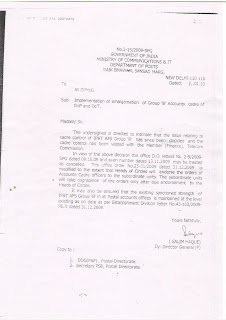 Postal Directorate issued orders vide Memo No.2-15/2009-SPG dated 11/01/2010 to clear the way to qualified JAOs to obsorb as AAOs in DOT.Now Heads of the Circles will endorse the orders of Accounts cadre officers to the subordinate units. The subordinate units will take cognizance of the orders only after due endorsement by the Heads of Circles.The order copy is available on left side of this posting for the information of the members, please click the same and get it. I convey my best wishes to all the eligible officials.

Posted by aipeup3ap.blogspot.in at 4:40 PM No comments:

DOPT issued an order on 14/05/2009 regarding Annual Confidential Reports(ACR). By this order ACRs have been changed to APAR(Annual Performance Appraisal Report) and The full APAR including the overall grade and assessment of integrity shall becommunicated to the concerned officer after the Report is complete with the remarks of the Reviewing Officer and the Accepting Authority wherever such system is in vogue.Where Government servant has only one supervisory level above him as in the case of personal staff attached to officers, such communication shall be made after the reporting officer has completed the performance assessment.It is also mentioned that "The new system of communicating the entries in the APAR shall be made applicable prospectively only with effect from the reporting period 2008-09 which is to be initiated after 1st April 2009".The concerned officer shall be given the opportunity to make any representation against the entries and the final grading given in the Report within a period of fifteen days from

the date of receipt of the entries in the APAR. The representation shall be restricted to the specific factual observations contained in the report leading to assessment of the officer in terms of attributes, work output etc. While communicating the entries, it shall be made clear that in case no representation is received within the fifteen days, it shall be deemed that he/she has no representation to make. If the concerned APAR Section does not receive any information from the concerned officer on or before fifteen days from the date of disclosure, the APAR will be treated as final.

Prior to that only adverse remarks in the ACR were required to be communicated for representation, if any. The then existing instructions further provided that the overall grading in the ACR should remain unchanged even after modification or expunction of the entire adverse remarks. It was left to the DPC to re-determine the overall grading if it considered that the expunction of such adverse remarks had so altered the quality of the ACR. The matter has been further considered and it has been decided that in those cases where the reckonable ACRs prior to the reporting period 2008-09 are to be considered in a future DPC on which the

adverse remarks of Reporting I Reviewing / Accepting Authorities have been expunged or modified by the Competent Authority, the "overall grading" in the ACR be kept blank for appropriate re-grading by the DPCs. The existing grading shall be blocked in such cases. It has also been decided that where the authority has upgraded / downgraded the overall grading without giving sufficient reasons, the DPC shall treat such an exercise as non-estlinvalid. General terms, such as "I agree or disagree with the Reporting Officer /Reviewing Officer" used by the Reviewing I Accepting Authority shall not be construed as sufficient reason for upgrading / downgrading the overall grading given by the Reporting Authority 1 Reviewing Authority. The proposals for the DPC where ACRs upto the reporting period 2007-08 will be taken into account should specifically bring out these guidelines.


The central trade unions will press for shelving of a proposal, that wants to tax withdrawals from savings schemes, including provident funds, at the pre-Budget meeting with Finance Minister Pranab Mukherjee on January 14. “(The) Finance Minister has invited trade unions for pre- budget consultations on January 14,” All India Trade Unions Congress Secretary D L Sachdev told media.

Although the central trade unions are meeting here next week to prepare their charter of demands, he said, “we would definitely raise the issue of Exempt, Exempt Tax (EET) mode for savings schemes”.

The draft Direct Taxes Code (DTC), on which the government has invited comments from public, proposed to tax all long-term savings schemes at the time of withdrawal by the subscribers.Currently, there are no taxes on long-term savings and pension schemes. Besides EET issue, Hind Mazdoor Sabha (HMS) Secretary A D Nagpal said, “We will also demand for higher income tax slabs to provide relief to the working class.”As part of the budgetary exercise, the minister meets the representative of different interest groups like economists, industrialists, trade unions etc to get their views on the budget. The trade unions, Sachdev said, would also press for the creation of a National Security Fund for urorganised workers in the country.In view of unionists the funds should have a corpus of a size equal to three per cent of Gross Domestic Product of the country for the welfare of these workers.The other major issue that could rock the meeting is imposing service tax on the contributions made to the Employees Provident Fund scheme being run by the country’s largest retirement fund manager Employees’ Provident Fund Organisation (EPFO).The issue came to light when some months ago, the Central Board of Excise and Customs slapped EPFO with a notice for not paying service tax on the contributions to these scheme. The scheme has around 4.7 crore subscribers across the country.

Posted by aipeup3ap.blogspot.in at 5:25 PM No comments:

Delhi CAT Judgement issued in respect of implementation of ACP

Dear Comrades,
On 23/12/2009 Justice V.K.Bali  and Dr.Ramesh Chandra Panda of Delhi CAT while disposing the OA No.1604/2009 of R.P.Singh V/S Govt. of NCT of Delhi it is clearly mentined that "We need not refer to the case law on the pont as that would unnecessarily burden the judgement. However, it is by now a settled proposition of law that promotion of an employee cannot be stalled by putting his case in sealed cover unless, if the employee is facing a departmental enquiry, charge has been framed by the concerned authority, or if he is facing a criminal case, charge has been framed by the criminal court.We find no justification whatsoever for the respondents to have kept the case of the applicant in sealed cover."