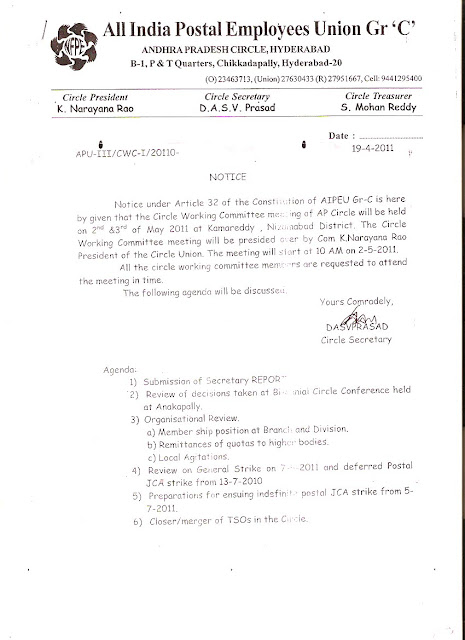 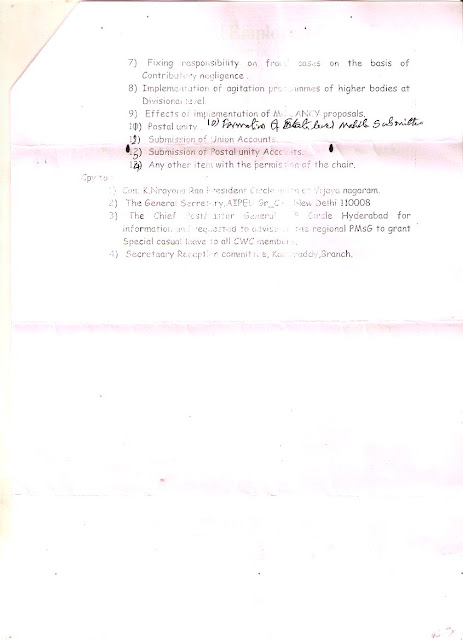 Posted by aipeup3ap.blogspot.in at 8:54 PM No comments:

Dear Comrades,
DOPT issued official minutes of the Third Meeting of National Anomaly committee held on 15/02/2011 vide Memo No.11/2/2008-JCA dated 21/04/201.The same is placed here for the information of the members.

Click here for order copy
Posted by aipeup3ap.blogspot.in at 6:36 PM No comments:

Click here to get the order copy
Posted by aipeup3ap.blogspot.in at 8:53 PM No comments: 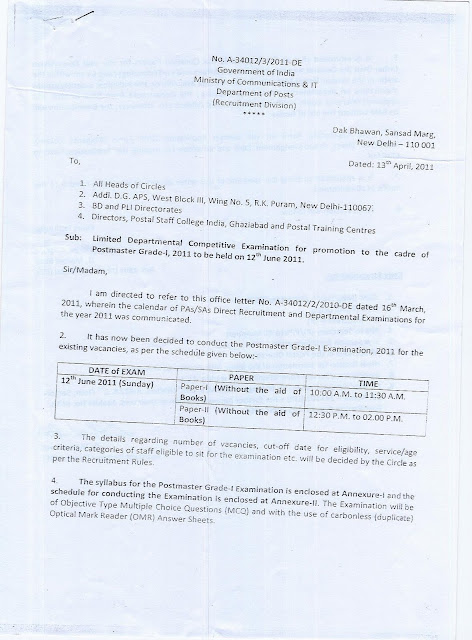 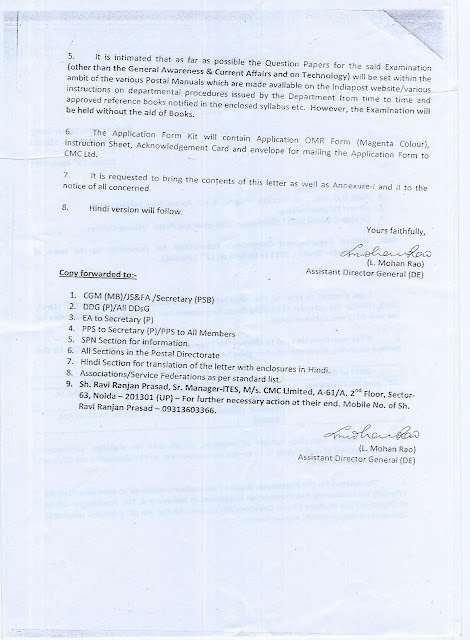 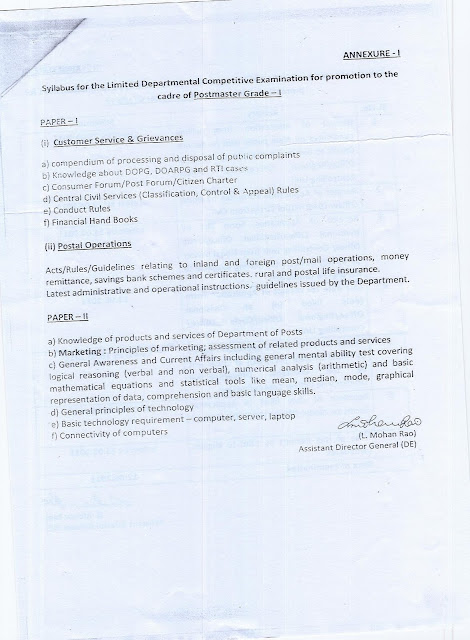 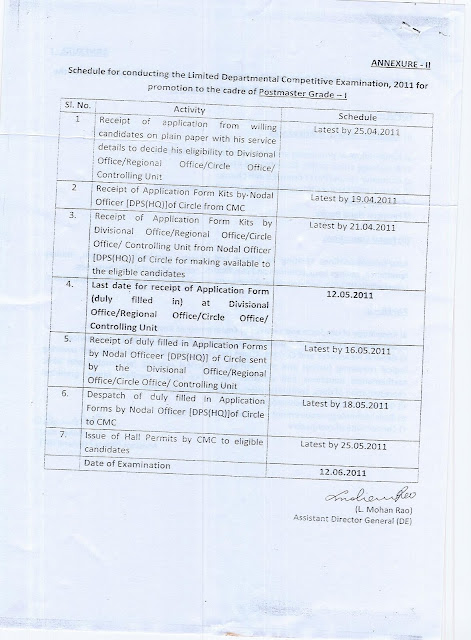 Posted by aipeup3ap.blogspot.in at 5:58 PM No comments: 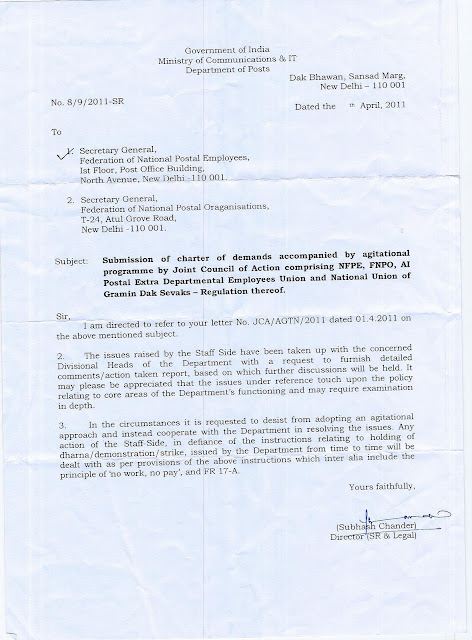 Posted by aipeup3ap.blogspot.in at 5:51 PM No comments:

Copy of the Memorandum to be submitted to Secretary, Department of Posts, CPMGs/PMGs/Divisional Heads on 20.04.2011


The joint meeting of the National Federation of Postal Employees (NFPE), Federation of National Postal Organisations (FNPO) and GDS Unions has reviewed the situation prevailing in the Department of Posts and has decided to organize agitational programmes culminating in indefinite strike from 5th July 2011 for realization of the genuine demands of the Postal and RMS Employees and also to stop the disastrous policy offensives unleashed by the authorities such as closure/merger of Post offices/RMS offices, outsourcing, contractorisation etc. we have already submitted a letter dated 01.04.2011 detailing the issues which are agitating the minds of the entirety of Postal/RMS employees including Gramin Dak Sevaks.
Accordingly, we hereby submit a Charter of Demands containing the items which are to be discussed and settled amicably, failing which we will be compelled to resort to agitational programmes as mentioned in our letter dated 01.04.2011.

NB: - Please enclose Charter of demands which is already circulated.

Posted by aipeup3ap.blogspot.in at 5:48 PM No comments:

Department of Pensions and Pensioners welfare issued orders vide memo no.F-42/15/2011 dated 11/04/2011 regarding amount of DA to the Central government pensioners who are in receipt of pension in pre revised cales as per 5th CPC.
Click here to get the order copy
Posted by aipeup3ap.blogspot.in at 9:16 AM 1 comment:

I would like to bring to the norice of the members that sri Anna Hazare, Social activist has been started Indefinite fast against Corruption. In this connection Confederation had issued a circular and a Programme in support of the Movement. The same is reproduced here for strict implementation of the Programme.Please go through it
8th April 2011
Dear Comrade
The indefinite fast commenced by Shri Anna Hazare against corruption and for an effective mechanism that will act as a deterrent against corruption has, by this time, caught the imagination of common people. The indefinite fast by Shri Hazare has touched the conscience of every Indian. It is quite heartening to note that people from all walks of life cutting across social and regional barriers are coming out in support of the cause espoused by Shri Hazare. This gives hope. Confederation of Central Govt employees & workers extends its full support to the indefinite fast against corruption by Shri Anna Hazare. Confederation HQrs call upon every affiliate & State Committees of Confederation to manifest solidarity with the cause espoused and action of indefinite fast by Shri Hazare. Day long mass fast and mass meetings during lunch hour may be arranged on 11th April 2011, Monday– if solution eludes and the fast continues.
With greetings

The Central Joint Council of Action comprising NFPE, FNPO and the GDS Unions has decided to submit a charter of demands to the Department and also to organize following phased programme of country wide agitational programmes culminating in indefinite strike from 2011 July 5th.
First Phase - Submission of Charter of Demands to Secretary, Department of Posts with a mass demonstration in front of Dak Bhawan on 20.04.2011. Copy of the memorandum will be submitted to all lower level authorities also after observing demonstration programmes in front of all offices.
Second Phase - Mass Dharna in front of Dak Bhawan, Circle/Regional/Divisional offices on 25.05.2011.
Third Phase - Country wide indefinite strike from 5th July 2011
Charter of Demands
1. Stop closure /merger of PO/RMS Offices including BOs. Review the orders implementing Speed Post Hubs and Delivery Hubs and restore status quo ante. Stop outsourcing the works of Postal, RMS & MMS functions.
2. Grant status as Central Civil Servant to GDS employees for all purposes including service matters, pay scale, increment, allowances, pension, promotion and other terminal benefits, leave, bonus and trade union facilities. Scrap new recruitment rules for appointment as postmen which curtails promotional avenues – restore previous rules and withdraw tighten norms assessing BPM’s work. Drop reduction of allowances in case of reduction of workload.
3. Revise the wages of casual labourers and contingent employees w.e.f. 01.01.2006 based on the minimum pay recommended by 6th CPC. Stop outsourcing the work of casual labourers and contingent work. Grant temporary status to eligible full time casual labourers , Convert part time into full time absorb full time , part time contingent employees in vacant GDS posts.
4. Immediate revision of OTA & OSA rates.
5. Implement the assurances made on 12.07.2010 Strike Settlement and also the JCM Departmental Council Meeting held on 23.08.2010.( List enclosed) Ensure prompt holding of Departmental Council Meetings.
6. Immediate finalization of Cadre Restructuring proposals including Postal Accounts as assured by the Secretary Department of Posts and its implementation.
7. Stop decentralization of Postal Accounts, PLI and RPLI and ensure status-quo. Save DPLI office, Kolkata and ensure job security to the staff, DPLI.
8. Expedite the process of filling of all vacant posts in all Wings including GDS.
9. Stop implementation of Postmaster Cadre till finalization of Cadre Restructuring. Ensure 100% filling up of LSG, HSG-II, HSG-I before implementation of Postmasters Cadre, remove the retrograde eligibility conditions for appearing the examination of Grade I and PSS Group B and allow account line officials also.
10. Drop the proposed move of ending the services of existing System Administrators by outsourcing the technology work to the outsider agencies. Create the System Administrators Posts as assured and specified norms and other works and make the cadre as a promotional cadre to PA/SA.
11. Stop combination of beats /double duty, stop harassment of staff insisting 100% impracticable condition for delivery under Project Arrow. Settle the demands raised in the Postmen Committee such as distance factor, number of articles, Grant of Cycle allowance without distance condition, cash payment for uniform and kit items, Supply of good quality uniforms, Revision of norms.
12. Fixing norms for new assigned works of MTS. Allow to decline postman promotion for MTS under seniority quota and review the recruitment rules of MTS to Postmen / Mail Guards.
13. Grant promotions to Drivers / Artisans at par with other C.G. organizations like Railways/Defence. Higher Pay Scales to charge hand & Drivers. Revision of CRC EPP and Logistic norms.
14. Declare SBCO Staff as Divisional cadre , Stop harassment of SBCO officials under contributory factors. Complete the Ledger Agreement Work update the SBCO before launching Core Banking.
15. Fill up all Postal Civil Wing and Electrical Wing posts as per CPWD norms. Creation of Postal /Electrical and Architectural Division in every Circle. Expedite the Restructuring of Civil Wing Cadres.
16. Ensure full fledge functioning of newly formed Postal Accounts Offices by providing adequate staff strength and accommodation. Rectify the anomaly caused due to promotion of Group ‘D’ official to the cadre of LDC after 2006. Restore the residency period of three years in respect of JA to SA promotion retrospectively w.e.f. 13.12.2006. Grant MACP to those joined in Sorter cadre treating LDC as entry grade as the Sorter grade has been defunct since 2000.
17. Counting of past services rendered by erstwhile RTPs for promotions and MACP.
18. Implement Apex Court Judgement in case of RRR Candidates in true sprit and extend to all approved RRR Candidates awaiting for absorption.
19. Stop Harassing and victimization of innocent officials under contributory negligence factors. Implement the true spirit of Govt orders and Volumes and no recovery should be made if the concerned is not directly responsible for the loss sustained to the department.
20. Stop discrimination towards PO & RMS Accounts Cadre, Create separate cadre and earmark % of posts for norm based promotions in the same cadre, Count Special Allowance for fixation on promotion, Withdraw the recovery imposed on Postman Pay fixation and drawal of bonus to GDS. Restore the date of passing the Acct examination for according LSG promotions instead date of entry in PA cadre.
21. Enhance the LR strength on all cadres to the extent of 20% and fill up all vacant LR posts.
22. Ensure prompt grant of Child Care Leave as per the liberalized orders, unnecessary hurdles put forth should be dropped.
23. Review the MACP clarifactory orders and rectify the issues like, non drawal of spl allowance on acquiring MACP, wrong interpretation of IIIrd MACP to departmental promotes only after 30 years, Counting as double promotions as Group D & Postmen even in the case of promotion to Postman on GDS quota, non counting of training period for MACP, ignore promotions acquired on deptl exam for MACP, ignore all uncommunicated average bench marks for MACP as Judicial verdict.
24. Stop attack on Union office bearers by misusing Rule 37 transfers and Rule 9 of CCS (CCA) Rules. Dispose all Rule 9 (Pension rules) disciplinary cases pending at Directorate years together.
25. Denying the legitimate right of employees to avail holidays & Sundays by compelling them to attend frequent meetings/ Melas.
Posted by aipeup3ap.blogspot.in at 5:28 PM No comments:

New Recruits may undergo Training This week at RTTC,Gachibowli

Dear Comrades,
In Recent development, Circle Office has decided to train New recruits at Regional Telecom Training Centre, Gachibowli, as per the availability of accomodation in this week.The orders will be issued shortly.
Posted by aipeup3ap.blogspot.in at 9:39 AM 19 comments:
Newer Posts Older Posts Home
Subscribe to: Posts (Atom)